A couple Easters ago I blogged about the fire that ripped through Notre Dame cathedral in Paris. The damage was extensive and pictures of the aftermath went round the world, particularly one photo a journalist took of a gold cross rising up from the charred interior.

I thought of that image this morning as the metaphorical remains of my Christmas plans smouldered, burnt by the flame of a virus nobody had heard of a year ago.

Wave after wave of government regulation has erased December festivities from my calendar. First, carol singing in church was off the cards. Next the late-night shopping trip with my girls. Finally lunch in a country pub was ruled out.

It has been disappointing and hard.

And yet this stripping back, this slow dismantling of all my regular Christmas activities has made space for a something really special. Like the gold cross in the Paris cathedral, I have been reminded that the manger is enough.

When I really lean in to it, the wonder of the Bethlehem miracle is absolutely and wonderfully sufficient. The reality of this Divine rescue mission, when all history was split between BC and AD, is enough to fill my Christmas with the meaning I crave.

And I do believe it.

I believe God became man. I believe that single miraculous event changed history and believing in it has irreversibly changed mine. To believe God could become incarnate is mind-blowing. Believing that He willingly would has been life-changing.

The manger is enough.

I look forward with anticipation to next year when those I love sit around my table, when our family traditions can continue, when church is in full voice and my Christmas is full of hugs and kisses and board games and laughter.

But for now the gift I have been given is the opportunity to put the manger front and centre of my Christmas, even more than usual. There is a quietness in my routine that has made space for worship. There is head space to pray for the recipients of gifts I am wrapping and slow mornings to read the gospel accounts with faith and wonder.

There is nothing I can add to make the Christmas story more beautiful. It sparkles without any lights, it shines with no tinsel, its melody needs no accompaniment.

And I am falling in love with this story all over again.

‘Who can add to Christmas? The perfect motive is that God so loved the world. The perfect gift is that He gave His only son. The only requirement is to believe in Him. The reward of faith is that you shall have everlasting life.’ Corrie Ten Boom 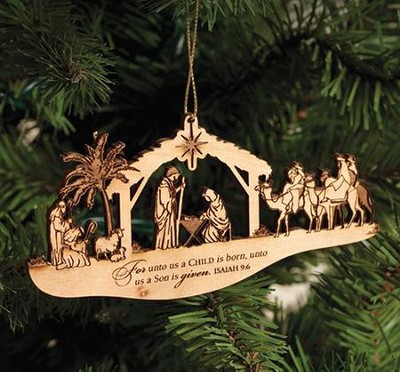 Our God has a habit of showing up in very unexpected places.

We see in Genesis chapter three his startling visit to the Garden of Eden after Adam and Eve have sinned.  As two broken souls are coming to terms with their first sip of shame, they are stunned to hear the sound of God’s footsteps as He walks through the ruins of paradise, looking for His children.

In Exodus chapter three, another man hears His name spoken.  Yahweh sets a bush ablaze and Moses experiences a Divine interruption of his ordinariness.  In that surprising moment, destinies are birthed and the dry desert becomes holy ground beneath his feet.

As onlookers witness the attempted execution of three Jewish boys in Babylon, their God, our God, makes His appearance alongside them in the furnace. Their lives are preserved, their uncompromising faith vindicated, their bodies and clothes unscathed.

But was there ever a more surprising appearance of God than in that manger in Bethlehem?

In one of my favourite quotes by CS Lewis, he says this.

“Enemy-occupied territory — that is what this world is.  Christianity is the story of how the rightful King has landed, you might say landed in disguise, and is calling us to take part in a great campaign of sabotage.

More than 2000 years ago, beneath a starry sky, God’s plan of redemption was set into motion.  He had successfully snuck behind enemy lines and out-manoeuvred the opposition.  Herod got a sniff of what is about to happen, but He was too late.  The rightful King had landed.

In a place of no fame, to an ordinary young couple, at a time when nothing much seemed to be happening, God shows up, His splendour hidden, His glory veiled.  After what seemed like a very long and dark silence, God speaks to His world with this full-volume, angel-illuminated announcement,

“Don’t be afraid. For I have come to bring you good news, the most joyous news the world has ever heard! And it is for everyone everywhere!  For today in Bethlehem, a rescuer was born for you. He is the Lord Yahweh, the Messiah.”

Let the wonder of this plan of God sink into your heart.  This moment in history was the fulfilment of hundreds of years of prophecy and it was the beginning of the end for the enemies of God.  It was a turning point in the war that would culminate in a victorious empty tomb.  The rightful King had landed.

I don’t know about you, but I need this today.  I need to remember that Jesus is a victorious King and that His place on His throne is undisputed.  My ordinary life has been brought into His Kingdom and He is at work in every moment to sabotage the enemy’s plans for me.  His ‘MO’ is to show up and show Himself mighty as He works miracles in my mess.

Thanks to God, I see the evidence of His presence.  The enemy is losing ground in my life.  God’s ways are finding their home in my heart. Like the wonderful scene from The Lion, the Witch and the Wardrobe, Aslan is on the move.  Winter is melting, Spring is advancing.  Bulbs of His character are poking up through my hard, cold ground.

I think Christmas is the perfect time to step up this ‘campaign of sabotage’ against the schemes of the evil one in our lives, and the lives of those we love.

As we wrap presents, let’s declare God’s purposes over the recipient.  Let’s sing Christmas Carols with less nostalgia and more faith.  Let’s pray for those who will be spending time with over Christmas, fighting on their behalf, expecting our God to show up and bring freedom, healing and breakthrough whenever souls and bodies need it.

Every prayer, every Godly thought, every kindness, every step of obedience is an act of sabotage, an act of war.

The rightful King has landed.  His Kingdom is on the move.  We are part of it.